A new phase of our game development journey together.... and some new rules.

Greetings friend! Hope the first half of your week has been good. Just wrapped up a map loading bug in AdventureQuest 3D and wanted to write you the AdventureQuest Worlds: Mobile update before I went to Zzzz.

We spent the day at the lab yesterday interviewing candidates for our receptionist position. We are going to finally re-open the lab! For the past two years our team has been working remotely. We have a lot of new faces.... and they never actually met in person! So it really feels like a new beginning. Or at least the start of some new phase of game development together.  It has been over two years since we used to make videos and do funny stuff together. I think there is a real opportunity to reboot our culture of art, games, and craziness.

Along these this reboot, we are embracing BRUTAL HONESTY.

That is-- I am REALLY going to let you know how things are going. When things are falling behind, I am going to tell you straight up. When we screw up, I am going to own it and do my best to make it right for you and the other players. We have always tried to do this. This is doubling down on our commitment to transparency about what we are doing and how things are going. I miss writing to you often and sharing all of the nitty-gritty things behind the scenes. Telling you things like how I went on a run with Zhoom on Friday night and a bug flew in his mouth. Which is funny because he has to deal with bugs in the game AND when we work out. 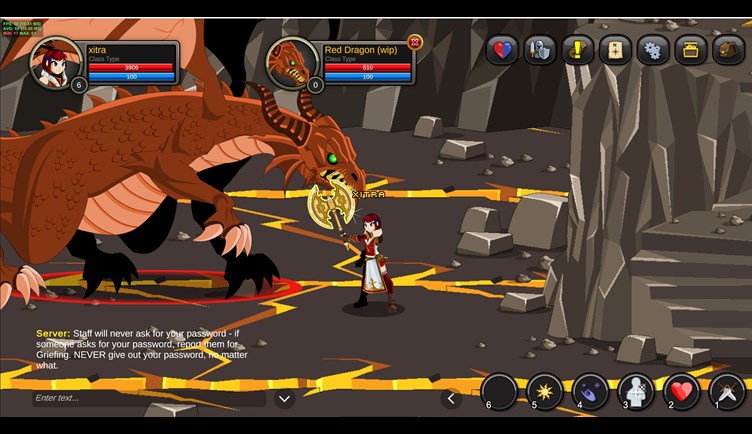 Wednesday mornings are our big team meeting days for this game project. Here is your report....

We are going to be in the Dragon's Lair for a while. How much longer? No idea. Until it is done. (Only 90-ish years according to the comments on YouTube XD.) But our 20th anniversary is THIS October. I would LOVE to launch this game for our anniversary.

Once the Dragon's Lair is complete, we will have every major system working. Re-creating subsequent areas should go shockingly fast. Good systems make game dev smooth and fast.

Diagon sent me this the other day.

Which of those three logos do you like best?

And... I was sorta surprised when he made the logo so much like AdventureQuest 3D. Was not my intention-- but since he made, it, what do you think of this?

We have not finalized the official title of the game yet. But "AdventureQuest 2D Worlds" does make a lot of sense. Well, it removes a lot of confusion. Because it is technically a different game than AQWorlds (although you use the same account), and it is definitely not AdventureQuest 3D. If you saw AQ2D and AQ3D next to each other on your phones app store it would be pretty clear what they were.