Being back in the lab makes it easier for the entire team to share things. Like... covid? Today's double post comes after the surprise lab plague of 2022!

Humor is important. When you are down and out... staring into an endless pit of dispair and hopelessness-- cracking a joke is a pro strategy. Well, it works for Deadpool, Spiderman, and I. How about you? Because between us... let me tell you, these past three weeks have been MAXIMUM comedy. Sure, I can tell you how challenging it has been with nearly EVERYONE at the lab taking turns being sick (in the worst possible timing). But instead, going to give you a good chuckle at my expense. After the family and I recovering from the first wave, I got sick (AGAIN) with an ear & sinus thing that KO'd me like King Kong punching a Dricken. Then, while still sick, our roof sprang a leak. The water heater blew out. We had a severe gas leak. The last one was pretty bad and super serious. As a friend in the D&DK chat said, "We were one fart away from complete annihilation." Although, hindsight being 20/22, I think he meant "match away". None of that compared the to truly scary thing I did while this was happening. >_> I read Twitter every day. (Bruuuuutal) The 9/10 anxiety was compounded by the withdraw symptoms from cold turkey cutting out Pepsi and Coffee. (But I went crawling back to coffee like a zombie to brains in at a science convention). On Thursday when I finally came out of my exhausted funk, my backlog of work, queued messed, and "urgent things" was horrifying. Missing one day at our pace is pretty bad. This.... this sorta requires a mulligan week XD. But I do not want to tempt the fates to turn this into a trilogy! X_X

But the AQWorlds:Unity Mobile team.... they did pretty good! 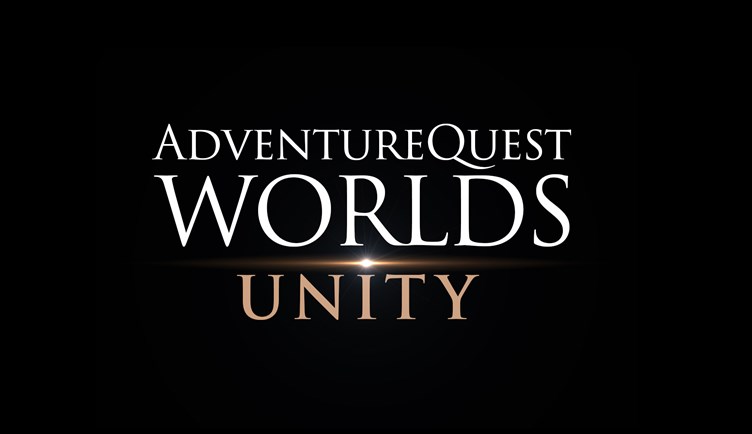 As usual, the full log of everyone's work is below... but I really wanted to share with you the results of our Quest User Interface meeting!

Diogon, Spider, J6, Tunik, and myself finally got together to review the Mobile/PC version of the quest interface. With everything else actually working, we are long overdue to finalize and implement it (my fault!).

The first thing we did was wireframes.... 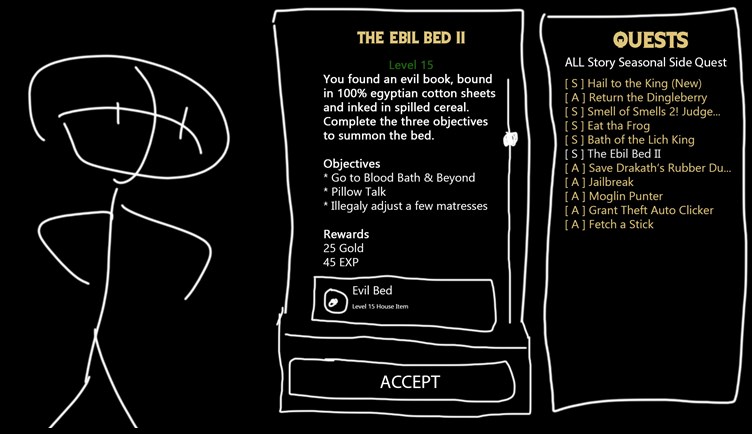 We are using a 3 panel design. Although, if there is only one quest, you will not see the right most panel. That is just for listing multiple quests.

Spider suggested that we add the preview feature for quest rewards. This is a MUST have! 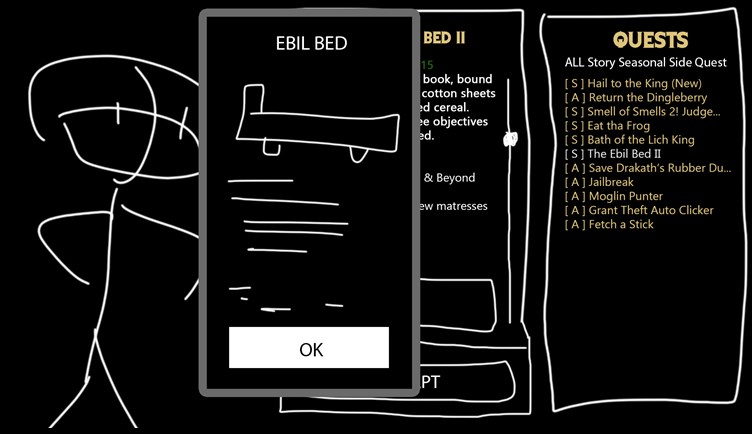 We should be extremely consistent in how we display things. So the item preview panel should be the same as the normal item view where you equip/destroy it.

Now... if you are already on a quest, you should have the ability to abandon or track it. Tracking a quest makes it your "current quest" and displays it on the main interface. 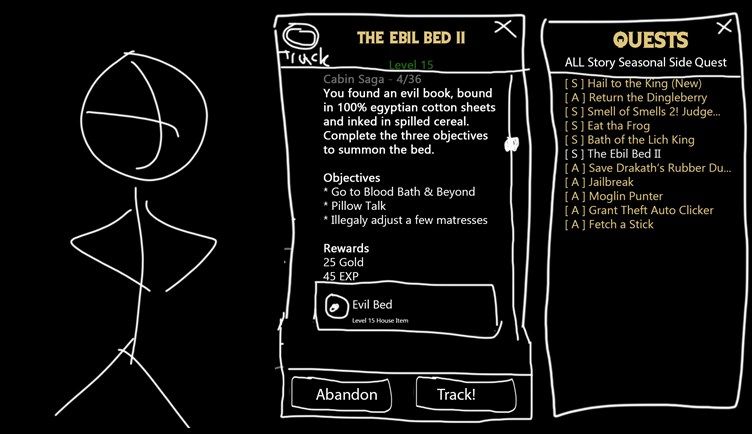 I ***REALLY*** want to put a speech bubble behind the spoken text if you are standing with the NPC. Tunik says this is possible.

One issue is that the name is missing from the Quest Giver if they are present. But we can probably add that as part of the speech bubble.

But what is there is no NPC? What if you open this from your quest log out in the middle of nowhere? 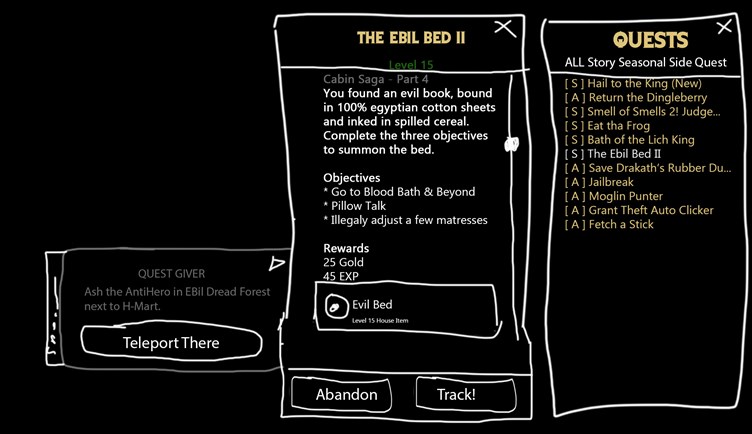 You can teleport back to the Quest Giver!

Most quests will allow you to teleport back to the quest giver. It will also help if you have no idea where you got a quest from. (It has happened to all of us.)

Diogon's UI/UX skill has been going through the roof! He put together the box version below. 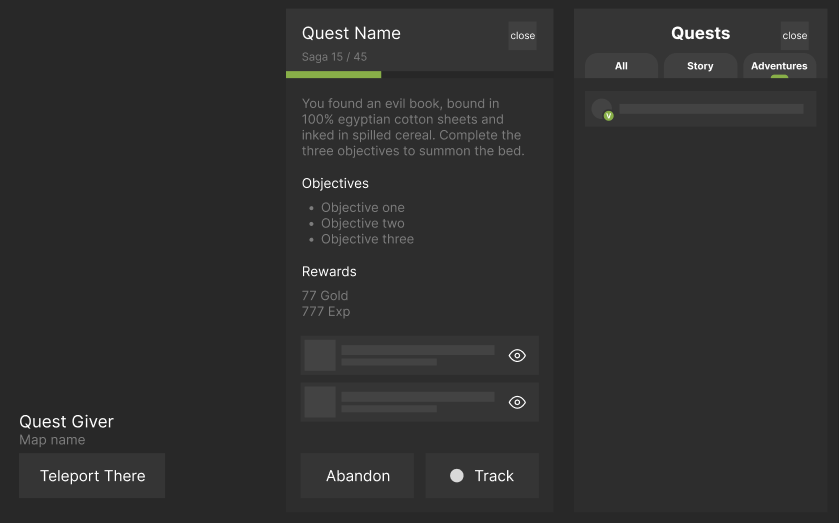 Currently, he is working on taking J6's art pieces and blending it together in a final design.

Remember, the almost all of this functionality already works in game. So this is the part where we are "making it pretty."

The best part of this for me was finally getting to work with those guys as a group! Everyone is so skilled, friendly, and easy to create with. <3 that group so much.

Until the next update, be safe, have fun, and laugh straight in the face of dread & doom.