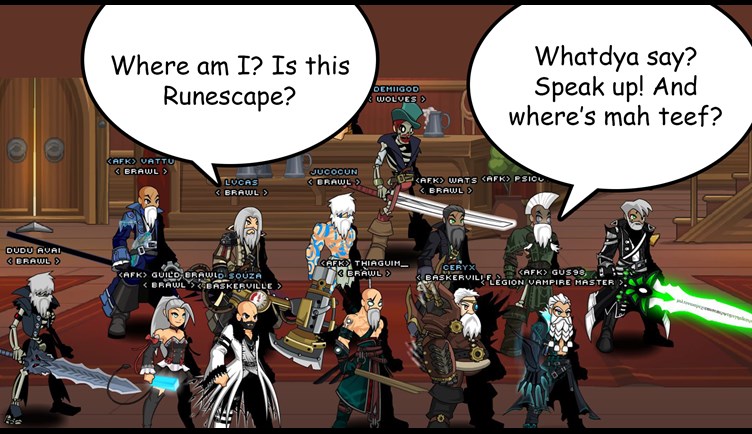 While we having been grinding away at this non-stop to achieve some sort of a release this year, however Captain Rhubarb put "Coming 202X" in the account manager. Which has erupted into no end of jokes & memes. The funniest of which is your great grandchildren will be there for the launch of this game. We REALLY need to make one of our upcoming tests make everyone who logs into the game have white hair and a beard. On that note, thank you to Astral Guardian, Vlad, Juco, and everyone who sent some screenshots from the existing game for today's post!

We are still pushing hard for "some sort" of release in October. Alpha? Beta?

Get a nice bowl of fiber and turn up your hearing aids... it is time for this week's progress report.

So, I played through the current version of the Dragon's Lair. The first thing that hit me was....  when you entered the zone, nothing told you that there was a major new story quest in that area. In AdventureQuest 3D, when you walk into a new area with a story it has a little quest bubble that appears in the upper right to let you know there is a new story available. We have been doing this for a long while and it works nice. So we will be adding that feature. The first quest will almost always be to find and talk to the area's main NPC and start the adventure. Also while playing in the Dragon's lair, everything worked... but the flow with the NPCs & quests was a little disjointed. Working on that now... which makes this the start of highly anticipated polish pass. At this point, the parts are technically working. The flow just needs to be smooth and fun. The team is fixing all of the existing bugs now. Next week I will be working on UI stuff with Tunik.

I am really grateful for the opportunity to take AdventureQuest Worlds to mobile devices and steam. This is an awesome project. Sure, it is a huge and scary project.... but this is the type of challenge that really gets you motivated.